After recently tying the knot with my German boyfriend, turned fiance, turned husband of 3 and a half years (thank you – thank you), I am able to look back and reflect a little on the lead-up to a marriage between two cultures that seem so similar but harbor very different traditions when it comes to tying the knot…

I was made aware early on of certain differences between the cultures when it came to planning the big day. For example: Germans take a minimalist approach when it comes to saying “I do”. First comes the civic ceremony where you sign the formal wedding license material – at this point you are officially wed. A tad understated for my liking, but who am I to criticize the division of ceremonies when most of Europe does the exact same thing? I blame Disney for my desire to have my husband-to-be waiting at the end of the aisle, smiling as he sees me for the first time in my beautiful dress, waiting to say “I do” in front of all our friends and family. I used to lay asleep in my bed clenching make believe roses and waiting for my prince charming to arrive (a la Sleeping Beauty) so I was aching for the whole nine yards when it came to having my fairy-tale ending. 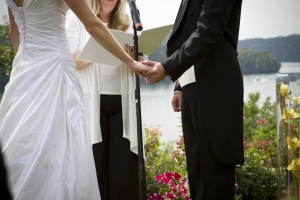 Now in Germany, following the civic ceremony, couples will often follow-up with a Church wedding up to a year later. I’m not sure why the wait in between, maybe it’s to see if getting hitched was really a good idea in the first place.The bridal party is small, one witness for the groom, one for the bride. No head table, no garter belt, and no drawn out speeches. This in itself makes Canadian weddings seem a little over the top. That being said – can you describe the typical Canadian wedding? Canadian weddings are a little bit of everything. There’s the tradition Church wedding, the city hall wedding, the outdoor wedding which is growing in popularity and can still consist of a priest, rabbi or whatnot if the “spirit” moves you, so to speak. Now, the over all lack of certain traditions ought to make it easier to pick and choose bits of each culture with which to flavour the remainder of the day, right? Wrong! Read on for some unexpected obstacles when it came to the specifics of planning the perfect day…

When I started contemplating flowers, my first thought went to Gerber daisies, for no reason really other than they are pretty, happy flowers, and perhaps a bit more cost-effective than some of the alternatives. When I asked my husband what he thought, I was unprepared for the passionate reaction I was faced with! “Not for a wedding though, right”? was his reply. Uh, no… that would be… weird? So not weird! Unless you’re German!

According to my Bavarian mate, only roses would be appropriate to celebrate our grand union. Roses it is! I choose yellow. But wait, he says. Yellow signifies death – you bring yellow roses to a funeral, we can’t have yellow! Okay mister. You’re talking to the anti-pink. If you’re trying to rope me into pretty link pink bouquets, you’ve got another thing coming. Thankfully, after a long discussion with his mom, truly an expert on anything floral, we came to the conclusion that yellow roses (mixed with orange) would be an acceptable choice of wedding decor. Phew! That was a close one.

Up next? Appetizers. I know, sounds lame right? I mean, it’s pretty standard. Soup, or salad? Well, little did I know the tradition of the German Wedding soup! Italian Wedding soup, by all means! But what do the Germans put in their wedding soup? Sauerkraut and sausages boiling in a tasty broth? Scrumptious. In fact, the variety of soup is unimportant, the important thing is that  soup must be served. Why? Because. That is how it’s done. Now, I don’t particularly like soup, however is it not an ueber Canadian thing to enjoy salad over soup at a wedding, so this particular point was open to discussion. My biggest argument here was: hot liquid + white silk dress = disaster waiting to happen! That being said, I really didn’t want to be responsible for the lack of soup when my husband’s family and German friends would certainly be expecting an appetizer of the liquid sort. I felt quite guilty taking away this part of his tradition and was all set to agree on soup as an appetizer when, thankfully, the budget allowed for both soup and salad to be served. We picked our battles. This was not one of them.

Now, one things the Germans do do… is waltz. Shoot me in the head. Enter the first point of conflict in our inter-cultural wedding planning experience. After my husband proposed in the middle of a beautiful Moroccan desert (can’t help but throw that in there), I, the predictable female, started brewing over flowers, themes, colors, venues etc. until we finally got to the first dance. I assumed naturally that we would be dancing to Ich und Ich “So Soll es Bleiben”, our song (see here for lyrics), but alas, So Soll es Bleiben is not a waltz-able song. I was devastated! I couldn’t imagine twirling in circles to a song to which neither myself nor my husband had an emotional attachment to – what a waste of a first song as husband and wife! In the end, after going back and forth, waltz, no waltz, waltz, no waltz, we agreed to meet half way, literally. We ended up dancing half our first dance to Edelweiss – a song that has meaning to both my husband and I on personal levels, and half to So Soll es Bleiben, the song that reflected our growing relationship over the past 3 and a half years. Problem solved.

How to bridge the cultural gap? 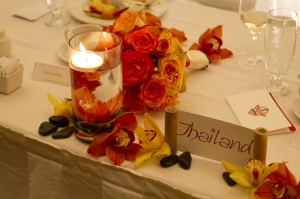 Focus on your life together as a couple, and nothing else matters. While we had amusing (and at times, quite frustrating) discussions over things like the flowers, the appetizer, and the first dance – they are all relatively small parts of the overall wedding experience, and neither of us were ever so demanding as to say it was our way or no way.  I can honestly say that sometimes the only way to blend cultures is literally to meet half way. Soup and salad. Waltz and meaningful song. Roses – but happy, bright roses that reflected our personality and love for each other.It’s also important to focus on the similarities and forget the differences. For us, it was easy. We met in Thailand so the theme was going to be subtly Asian and include Thai appetizers, bits of bamboo, and orchids in the centerpieces! Choosing something we had in common instead of focusing on the traditions we brought to the table as individuals was the easiest ways for us to tackle our cultural differences and produce a wedding which meant everything – to us.

Things being said, I now understand why some couples with different cultural backgrounds choose to elope over attempting the merging of age old traditions (or in the case of Canada, relatively new ones). For us, the planning process was stress-free and fun every step of the way! In our case, wedding bliss was on the horizon and now we’re happier than we’ve ever been. But be sure to plan ahead, stick to your guns and take your time merging the cultures – but if you decide this is mission impossible, fly to Hawaii… it’s suppose to be great this time of year.

4 thoughts on “A German Groom. A Canadian Bride. Wedding Bells, or Wedding Hell?”