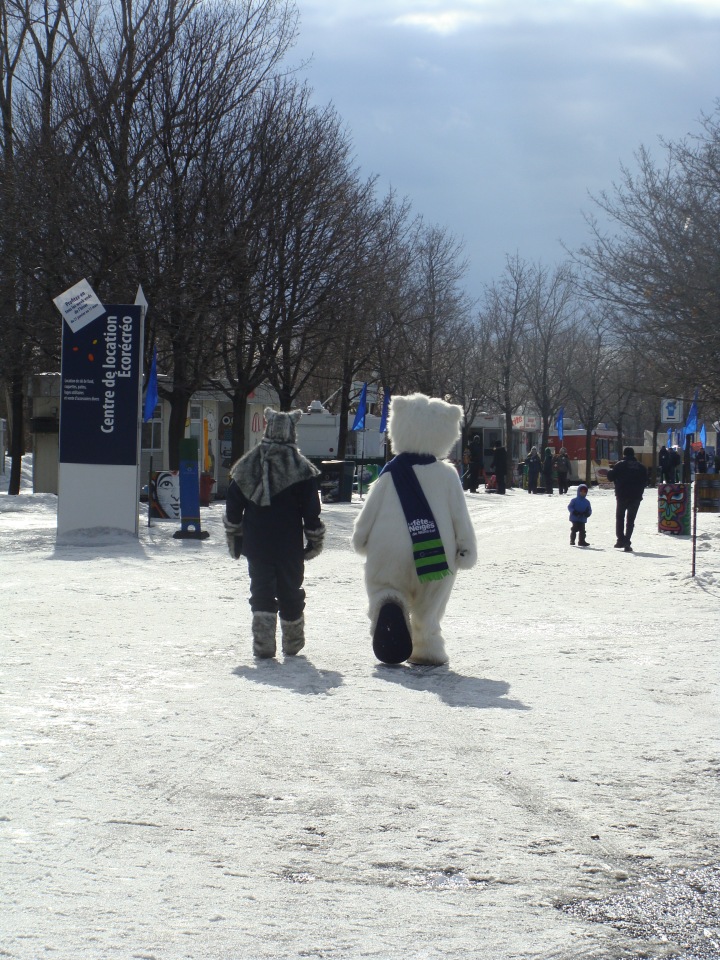 My mouth is watering as I pull into the platform at the Gare Centrale in Montreal. I can already taste the buttery croissant I have been looking forward to for the past 5 hours, suffering the shaky path of the VIA Rail (read more about VIA Rail here) as we make stops en route from Toronto in Oshawa, Cobourg, Kingston and so on. All I want is to enjoy a cup of hot tea that isn’t spilling over myself and my laptop as I try unsuccessfully to connect to the WiFi en route .

Exiting the train, I’m greeted by a friendly “Bonjour!” and with an energetic smile, I return the greeting and relish in the fact that I have begun my mini-escape in the  most European this side of the Atlantic. The city, 3/4 of whom are native French speakers, is the second largest French speaking city in the world. But it’s not only the language that is reminiscent of old world Europe. Montreal is arguably the cultural hub of North America and is without a doubt the most colourful city in Canada.

As an anglophone from Toronto, it can be intimidating to step foot into a culture so deeply rooted in French soil. The tension that remains between the English and French is still a salient part of life in Montreal, and the events of the 1970s that witnessed a mass exodus of anglophones are never truly forgotten. For those of you unfamiliar with the history of Quebec, here is a brief overview. The 1960s gave way to the Front de liberation du Quebec (FLQ) whose goal was to separate from the rest of Canada. In 1970, members of the FLQ kidnapped two diplomats, James Richard Cross and Pierre Laporte, who was assassinated soon thereafter (this was known as the October Crisis). A large number of people, primarily those who supported Quebec nationalism were unlawfully arrested and while the chaos eventually calmed down, the seed had been planted that caused the ethnic make up of the province to shift dramatically. Nowadays, the most visible reminder of these events is the Parti Quebecois, a provincial political party whose goal remains the eventual sovereignty of Quebec.

For now, however, Quebec remains a gem nestled (albeit, a tad unwillingly) within the boundaries of Canada. While you will find hints of French in and around Ontario (you can find all designated “bilingual regions” under the Official Languages Act), it is only once you make the cross-over from Ottawa to Hull that you are able to appreciate the differences between English and French Canada. Two hours later you’ll find yourself in the most flavourful city in Canada -Montreal.

Politics aside, Montreal is a “must-see” while touring Canada. I am always devastated when I that tourists chose to combine a trip to Toronto with a visit to New York City as oppose to making the drive (or train ride) further east to what is, what I consider, the trendiest and most happening city in the country. And I’m not the only one who thinks so. Ask anyone, which Canadian city they would label the ‘hippest’, ‘most fashionable’, ‘most cultural’, or most ‘socially engaged’ and all fingers will point past Toronto to Montreal. Maybe it really is the French blood running through their veins – their cousins across the ocean are notorious for being passionate about everything, from strikes and social causes to fashion, culture and mouth watering cuisine – or maybe it’s a feeling all their own that has “Montrealers” protesting hikes in tuition fees, or skipping down the trottoir in four inch heels – whatever it is, it works.

So – after stepping one one platform, I head straight to another. No, I am no longer talking about trains, or transportation of any type for that matter. I’m talking shoes! Shoes, blouses, skirts, you name it. One of the most strikingly obvious things when arriving in Montreal is the abundance of fashionistas parading the streets! In my old jeans and T-shirt, I feel massively under-dressed. First point of order? Run into Simons and buy a new outfit. Simons, a department store similar to Sears or the Bay, is a goldmine for the basics and the beyond and I rarely let a trip to Montreal slide by without at least popping my heads in to see what they have on display… and on sale! Of course, there’s more to Montreal than shopping, but it is an important part of every girl’s visit.

Feeling at ease with my looks, I’m ready to embark on a mini-holiday… and share with you some of my favourite ways to spend a weekend in Montreal:

1. Take a walk down the Quartier Latin

Located at the cross-section of Rue St.Denis/Rue St.Catherine and heading north, the Latin Quarter in Montreal is one of my favourite places to grab a cappuccino and simply stroll. Whether you’re contemplating life or taking in the beauty of the Victorian style houses lining St.Denis, this is one experience you don’t want to miss.

Start your journey with a cup of coffee from one of the many coffee shops you will pass en route. After all, you will need something to sip on once you give in to the temptation of bakery after bakery selling the most tantalizing pastries you have ever seen. Being somewhat of a croissant snob (I insist that my croissants be soft and warm on the inside while covered with a crunchy outer shell), it carries great weight when I say that here, in the Quartier Latin, you will find the perfect croissant. Needless to say, additional delicacies like fresh bread with blue cheese and walnuts, melt in your mouth croque monsieurs and cream filled eclairs are also available for your tasting pleasure.

While the Latin Quarter by day is stunning, the best way to experience the joie de vivre of Montreal is to join the locals when the sun goes down as they head to St.Denis for some of the best dining in Montreal. With tons of restaurants, bars, bistros and cafes literally lining the street, the Latin Quarter is a great place to meet up with friends and enjoy food from around the world. Restaurants that allow you to “bring your own wine” also provide a neat experience for visitors from Ontario and with a conveniently located SAQ (chain of liquor stores in Quebec), you can never arrive unprepared.

3. Take a load off, on Crescent Street

Known for it’s fabulous shopping, St.Catherine Street is the place to go to buy just about anything your heart desires. Here you will find everything from Maple Syrup and other souvenirs of your trip to Montreal to well known department stores as far as the eye can see. St.Catherine will take you all the way from the Quarter Latin into Westmount, also known as the upper-end of Montreal. Most importantly, just off Rue St.Catherine you will find one of the most happening ‘apres work’ scenes in Montreal: Crescent Street.

Crescent Street, or Rue Crescent, is a street of bars and eateries that offer great terraces to be enjoyed during a summer’s day and live music that will keep you dancing through a winter’s night. Many of these places, like Thursday’s, a smokey bar that offers two for one drinks every Thursday, have become institutions of their own, and have witnessed the coming and going of one generation after the next. As oppose to the Latin Quarter where the French feeling really oozes through each edifice and storefront, Crescent street,  a stone’s throw away from English speaking Concordia University, offers an eclectic choice of restaurants and bars that attract a wide range of visitors. English, French, Black, White, Rich, Poor… you’ll find it all on Cresecent Street.

Picture yourself walking down a narrow street lined with cobblestones, signs hanging overhead and stone buildings surrounding you. Bells toll from the basilica nearby and all at once you’re transported back in time to an era when architecture was a thing of beauty and wealthy merchants adorned the streets of this bustling 18th century waterside city. No, despite the sensation, you have not been transported across the ocean to Salzburg or Zurich, you’ve just stumbled into the heart of Vieux Montreal.

Incomparable to other parts of the city, Old Montreal has a beat of it’s own. Tucked behind the Notre-Dame Basilica is a walkway of apartments, shops and restaurants that take you back in time. Enjoy a promenade along the Old Port followed by fantastic French cuisine at restaurants like Chez Queux  where the ambiance and wine list will make you wish that your petite sejour never had to end.

While these strolling the Quartier Latin, grabbing a drink on Crescent Street and dining in Vieux Montreal may be on my favourite things to do in Montreal, after one or two visits, you’re sure to develop a list of your own. Whether it’s climbing Mont-Royal for a spectacular view of the city, hiking through some of Montreal’s more accessible parks or playing the tourist card and taking in the wonders of the Biodome, which I seriously recommend, it is all there for you to discover, one step at a time.

Whatever you do, be sure to stay on top of what’s happening in Montreal during your stay by checking out  the Place des Arts for various festivals that bring this city to life in every season (see picture below of the Light Festival from February/2012). Don’t forget to hope onto the Montreal Tourism website for up and coming events updated daily! FYI: Getting around is never a problem as the STM connects to just about every part of the city.

So, what are you waiting for? Allons-y! Et bonne voyage.

2 thoughts on “Magic Moments in Montreal: the English, the French and the In-Between”