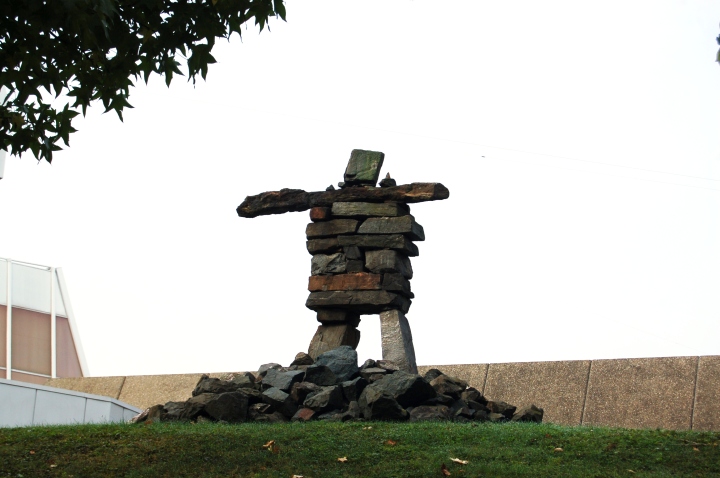 Two years ago, I moved back from Germany to Canada in the hopes of starting up a job in my field and preferably in a language I could speak (well). After four years of living an as Expat, the experience of returning ‘home’ was more difficult than I thought and after struggling to accept the reality that I was no longer living the life of a globetrotter extraordinaire, I realized that I had to discover how to deal with the shock of being an Ex-Expat, or live forever in the in-between.

Life can only be understood backwards; but it must be lived forwards. [Kierkegaard]

Life an as Expat

When you’re living abroad, away from everything you know, there are certain things that become “normal”. For example, having an identity forged for you as the “foreigner”, the “wanderer”, the “traveler” and every other name for someone who just doesn’t quite fit in. Don’t get me wrong, you may fit in quite well, but you’ll never be native, so to speak. The funny thing is, there is often comfort in being the odd one out. You know your role, you know how others perceive you and you know how you’re expected, or not expected, to behave. Plus, you can get away with a lot and chalk it up to “cultural misunderstandings”; it’s not encouraged, but it happens.

It’s not only your identity or role among friends and colleagues that is determined for you, but the entire way in which form your social network. All of a sudden, you are separated from those who knew you in high school, college, or university and you get to start fresh with people you most likely meet at other Expat-type related events.  If you’re brave enough, you’ll also try to take part in some more local events, but many Expats, particularly those living in non-English speaking countries, prefer to run with a familiar flock and hope they meet one or two locals along the way. Over the past few years, I’ve made a number of good friends during attempts to build a network overseas at English speaker Amnesty International meetings, book clubs, international networking events (hosted by organizations like Internations or meet-up) and most notably, the Irish Pub. No matter where you travel, there is at least one solid Irish Pub beckoning the English speaking Expat and backpackers passing through.

When I landed back on Canadian soil, for months I proudly retained my identity as the vagabond having just moved back from living far, far away, with stories to tell and cultural comparisons to make – all the time. Gradually however, these cultural comparisons get boring (even annoying: who wants to hear for the fifth time how much cheaper groceries were in Germany than Canada?), the pictures had all been shared, the stories been told and re-told and then… and then, there was just me. I wasn’t used to being just “me” without something attached to define “me”. Once upon a time I’d been a varsity athlete, then I’d been the globetrotter, and now? All of a sudden I was back to square one and back in Canada, where the first question a stranger will ask is “what do you do?”. What do I do? I, ugh… I write? Sort of? I love to travel but I don’t officially do that anymore, unless I’m on holiday but anyone can do that! Am I having a mid-life crises a quarter of the way through? Not quite. But I was at a bit of a loss. So, how did I get back to finding me?

How to overcome the in-between

1. Reconnect: The first thing I did upon my return was bathe in the friendship of family and friends from who I had been separated on and off for so many years. All of a sudden, when we moved, we had people offering to help us. When we had a birthday or engagement to celebrate, we had people asking where and when they could come to join in the festivities. As an Expat it’s easy to forget just how nice it is to have support around you without having to search for it. While all of my friendships and ties with family remained strong overseas, to spend quality time with those you love without having to cross an ocean to do it is something you shouldn’t take for granted.

2. Appreciate the familiar: As an Expat, or a regular backpacker working your way around the world, you start to thrive in uncomfortable situations. Every situation becomes a challenge, every unknown word a clue or an obstacle to understanding the world around you. Being uncomfortable almost becomes an addiction and anything that is even remotely familiar becomes synonymous with routine and boredom. Once you’re back however – after an initial bout of depression and a sinking impression that all is mundane and you’ll never again find light in the world – you actually start to appreciate the familiarity of things around you. The ease of understanding the processes and procedures inherit within the system actually do make life a lot easier: from knowing where to get your health card renewed to how the banking system works, all the stresses you had to deal with on a day to day bases in a foreign country disappear and give you more time to focus on the bigger picture. The bigger what? Yes, there is a bigger picture. Or there can be. Read on!

3. Recognize an opportunity to grow: While overseas, it’s often enough just to be living (and surviving) as an Expat – and it’s easy to forget that there are other directions in which you can to grow, other parts of your life that needs exploring. When I was living in Germany, I was teaching business English – something I enjoyed but not something I necessary had plans to pursue at a higher level. Being back in Canada however, utilizing existing connections and taking advantage of the familiar work environment and expectations, I was able to explore a new career as a writer, something I’d always wanted to do but hadn’t necessarily had the time or ability to pursue overseas. Recognizing the ability to grow in new ways is definitely a key component of overcoming the disappointment of being an “Ex-Expat”. Today, I’m taking German lessons, playing in a co-ed rec soccer league with friends (including my husband), meeting up with people for drinks, celebrating family holidays and inviting people over for dinner parties at our brilliant new apartment right downtown! I’ve had the chance to develop professionally and be a better friend and family member to those I love – just by being present. And you know what? It feels great.

4. Take a moment to reflect: When I first moved back to Toronto, I teared up the first time I stepped foot on the TTC. Not only was I convinced that the Toronto transit system was backwards, filthy and filled with crazy people, but  I longed to look out the window and see mountains, and missed the familiar voice telling me to  “mind the gap” in the London Tube or the U-Bahn voice directing me to exit (“Bitte in Fahrtrichtung links aussteigen”) as I pulled in from a day’s work in Holzkirchen. Instead, I saw a city I didn’t understand with a system I’d left for good reason. It took one visit back to Munich to realize that maybe… just maybe I was being a little too harsh on the country we chose to call home (at least for now). It all honesty, the German U-Bahn isn’t that clean and while you may get a couple crazy people riding the TTC, in Munich you get more drunks because it’s legal to consumer alcohol in public places. I also realized that maybe the Toronto skyline wasn’t so bad after all, it was just, different. And then it hit me. Nothing about Toronto was bad, it just took some getting used to. No country, or city, is perfect. They are all flawed in some way or the other. It just takes time to acknowledge the advantages and accept the flaws from one place to the next. Don’t worry – give it time.

5. Book (or at least schedule) holidays in advance: Last but not least! The best way to survive life as an “Ex-Expat” is to keep on traveling. From weekends away to holidays overseas, it helps to know you’re not stagnant just because you’re back where life began. This particular lesson took a while to  sink in (for both my husband, and myself) but now we know to always have something big booked two-three months in advance and something small scheduled in-between. Don’t stop moving just because traveling has moved from being your life, to something you get to enjoy once every few months. Explore natural parks, local hot-spots, neighbouring cities and places you may have never thought were worth exploring. When travel becomes a luxury and not part of your daily life, you start appreciating the value it adds and seeking the lessons it teaches in smaller doses, wherever you can. Explore the world around you and bring the Expat mentality with you, wherever you are.

4 thoughts on “Woes of a would-be globetrotter: an “Ex-Expat” stuck in the in-between”

baby giraffe giraffe lifestyle giraffe on the run giraffe travel guest travel blogs street eats: foods from around the world The baby blogs thetravelinggiraffe the view from above top tips from thetravelinggiraffe
Loading Comments...
Comment
×
%d bloggers like this: