This past December, I made a plan to visit the glorious five villages of the Italian Liguria region, the Cinque Terre. To wander the isolated, cliff-topping villages and hike the rugged trails over-looking the Mediterranean had always been on my wish list since seeing a friend’s photos of the region while she was spending time in the neighbouring “big city,” La Spezia. The hiking trails of the Cinque Terre were constructed by local “sea people” as a means to get to nearby villages quicker for supplies. Walking the same paths as locals did to me was the authentic traveling experience I was looking for, and I wanted to take in every bit of it.

Doing some pre-departure research, I was well aware that strong rains often accompany the winter season in the Cinque Terre. This was the case in 2011, where severe landslides took a toll on the 11th  century construction, devastating one village especially, Vernazza. Potential risk of landslides often causes such famous hiking routes like Via del Amore to close. During my time on the Liguria Coast, this was indeed the case not with one, but with all of the hiking trails in the Cinque Terre!

Still determined to find a way around the closed trails, I attempted what locals call the “higher route” from Manarole to the highest situated village of the five, Corniglia. According to the city information kiosk, this route was also dangerous. Twenty minutes into my hike, pouring rain had coated the sleek steps. What looked like piled broken branches blocked my pathway and my barely-there grip footwear had me second-guessing my decision. Flashbacks started, bringing me back to the evening earlier; two plaques are stationed on a rock wall in Manarole to commemorate the life of a Canadian who accidently drowned, and an American who, as it says, was swept away by her husband, the Via del Amore. Gut overtook my adventurous side. After standing soaking wet from head to toe so short into my 1.5 hour hike, I decided to call it a day and take the local trains. I would try an alternate path tomorrow. 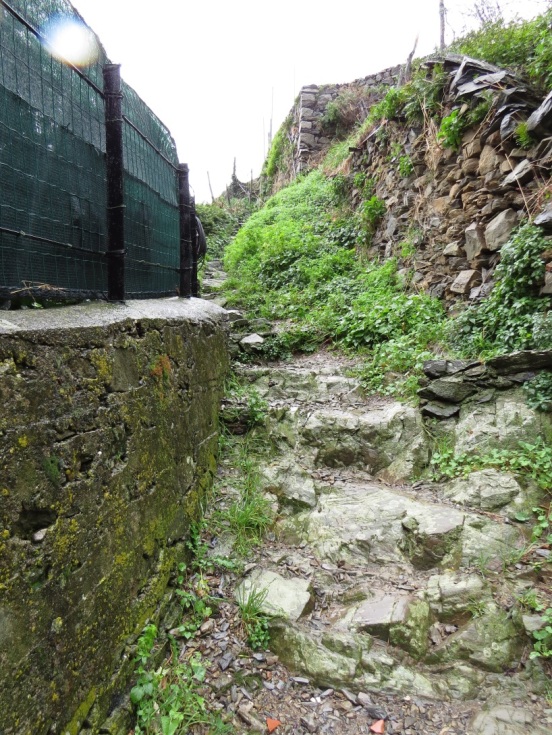 The next morning at the foot of Riomaggiore, the village closest to La Spezia, I followed the tourist crowd up and down the main street along tourist shops, co-ops and over-priced restaurants. On my descent to the train station, I veered path, turned up and right, passing a homeowner who was tending to his small garden of herbs, flowers and lemon trees, over-looking the tourist mass at the bottom of the hill. I felt a piece of stillness as the quieting of crowds. A small church tucked away by the village’s watch tower and a wooden cross over-looking the sea provided me with a few minutes of refuge. 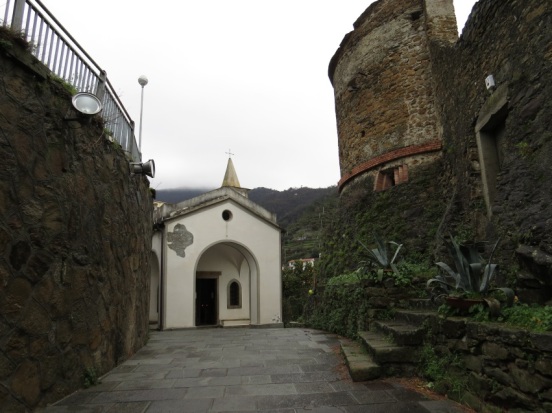 I resolved to get myself lost through the windy, narrow alleyways, where sunlight seldom creeps in to find a walking path by the sea. I passed a police officer who was speaking to a local and down some steps opposite the way to the marina. What I found was “Panoramic Lane.” Passing doorways and backyard fences of private properties, Panoramic Lane seemed to be my ticket. The sign was in Italian and English, so it must be open to the public, I thought. Descending down the steps I glanced at a knocked down gate with a sign that read “Vietato, il transito ai pedoni.” I had no clue what this meant, as my Italian, I can say consists of basic greetings, counting 1 through 10, time, and a few words here and there. This got me by for the most part. The sign however, did accompany a stick figure walking with the no symbol. This got my attention, still, I ventured further. 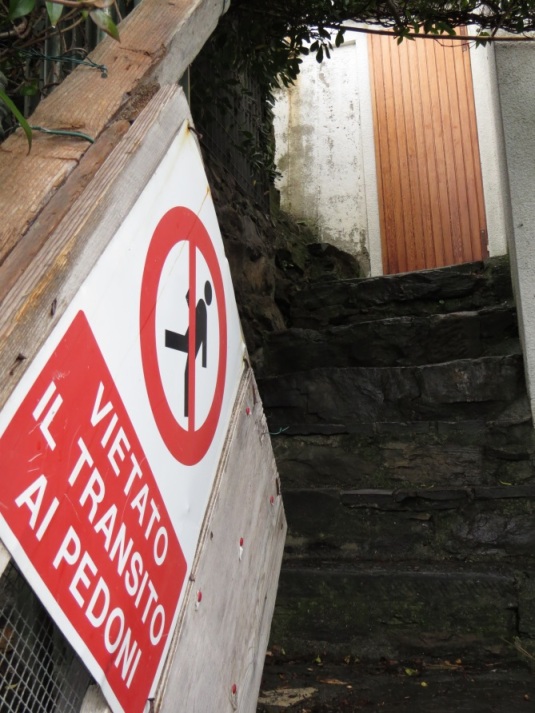 Arriving at a corner edge, another sign “sentiero chiuso per FRANA” with a visual representation of landslides sat below a sign with the walk symbol. I chose to follow the sign illustrating go, so I continued to walk. Although the signs seemed conflicting they weren’t enough to deter me from my goal. 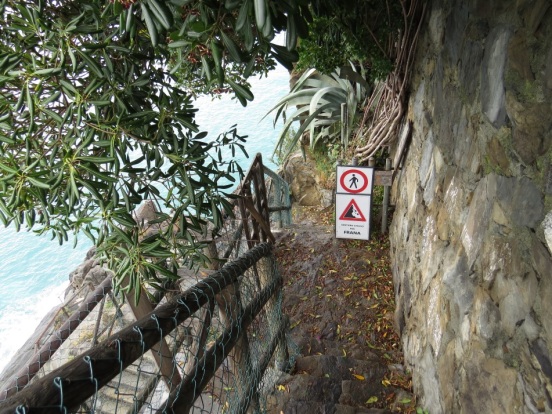 What did however, were broken fences, posts that had fallen over and heckling seagulls, daring me to venture further downward toward the force of the heavy winter waves thrashing against the rocks. I paused, thought to myself for a few moments and but again turned around. It’s easy to be so courageous when you have wings. 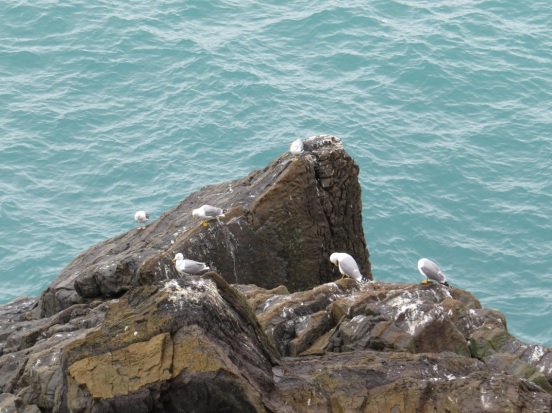 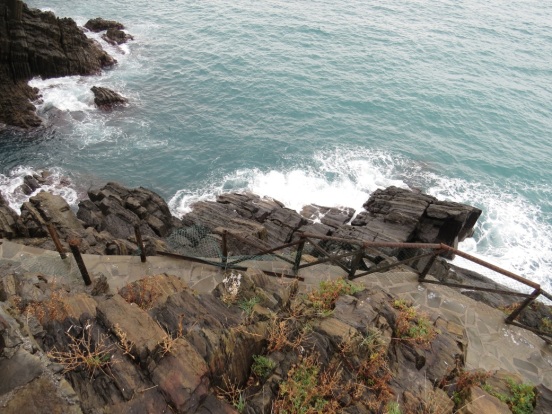 After feeling a tad disappointed at the end of the day of having not wandered the hiking trails of the Cinque Terre, I headed back to my hostel in Mararole. There was a new roommate, *Andrea at front desk told me, and she’s Italian! *Isabella is also here to hike the trails for a tour group that she may bring to the Cinque Terre in the coming year. I said to her, “Don’t bother with the trails, they’re all closed!” “What?” She replied. “Yes, most are, BUT the top one to Corniglia is open. The trail is safe to hike. The only reason that it is closed is because the towns do not want it open this time of year, yet the government does. A local man jumped out at me at the end of the trail, BUT it was safe.”

As I learned, when in the Cinque Terre, ask a lot of people, a lot of questions, and try to ask in Italian. Often, Italian-speakers will tell you that something is “impossible.” If you are a tourist speaking English, in a touristy area, in the low travel season, you may encounter more difficulty. This word, the word BUT, is the exception to the rule and more often than not, there are exceptions in Italy. Messages are conflicting and confusing (see below). You just have to be courageous enough to follow your heart, but be cautious enough to listen to your gut. Safe and happy adventures! 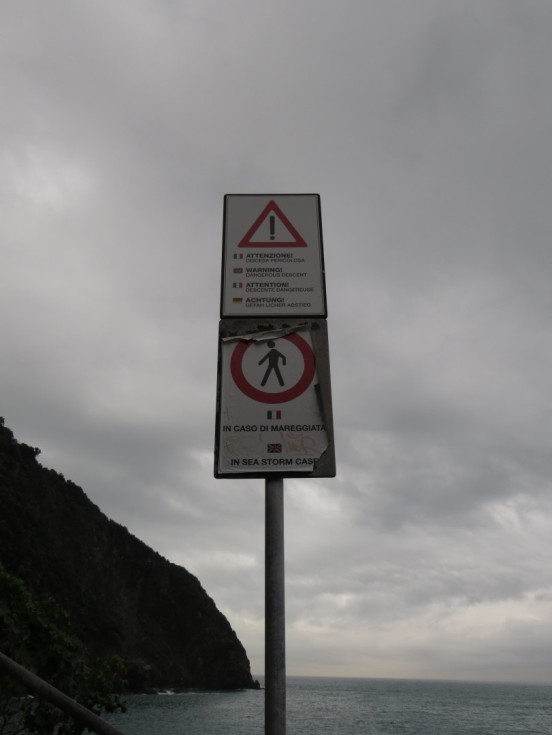 *names have been changed