After surviving a full year of parenting (barely), we finally convinced the grandparents to take the little one so that mommy and daddy could enjoy a little well-deserved time away. Truth be told, I was ridiculously ill-prepared for this little getaway. Normally the anticipation and excitement resulting from having booked plane tickets would drive me directly to Amazon.ca, where I’d pick up a fresh guide book off the virtual shelf and await it’s delivery with baited breath. Instead, however, of studying the not-to-be-missed local cuisine, historical highlights, and roaring nightlife, I was busy making sure that I’d packed enough diapers, remembered to drop off Luna’s health card, and writing down every important aspect of my daughter’s routine knowing very well that my dad would throw it into the garbage the moment I walked out the door. Frazzled, wound up and not at all ready to relax, it was only once Grandma and Grandpa had ushered me out the door – to the sound of baby screams flowing down the staircase  –  that I took a deep breath and realized I was supposed to be on vacation. All I really wanted to do? Was sleep. And it took me a one hour flight, a glass of wine, one long-ass commute from Dulles Airport and dropping off my luggage at our hotel, before I finally let go and embraced my 72 hours of freedom.

I have to admit, when we booked the Hyatt Regency, I nearly fell off my chair. Maybe it’s because it totally reminded me of The Regent Beverly Wilshire Hotel from Pretty Woman (pause for cinematic grandiosity and award winning smiles… oh, Julia). Anyways, I totally envisioned throwing open the curtains and staring down on Capitol Hill. It didn’t quite work out that way, but the hotel was still pretty nice. Honestly? I expected a little more, although in fairness it hovered somewhere between a 3.5-4 star on all the ratings. I guess it was that we were paying an arm and a leg for our stay, despite having found a deal for 50% off through Trivago (all hail the belt-less wonder of a man who relentlessly pops up every time I turn on the TV. Not that I mind. I mean his voice is strangely comforting. Whoever recruited that man definitely deserves a raise). Where did the hotel lose points? I’d say the minute I called down to ask about the hot tub that turned out not to exist. Ugh, I didn’t bring my bathing suit to actually swim! I wanted to soak away the stresses of having a one year old run around my living room all day! Unfortunately, the “heated pool” didn’t quite do it, so my husband and I, after jolting down to the fitness floor half naked, decided to high-tail it back up for a hot shower before dinner instead. The fact that I passed a cockroach guarding the dry sauna in the ladies room on my way out? Sort of icing on the bland tasting cake. The rest of the hotel wasn’t bad, and the characters behind the concierge desk fully made up for the lack of amenities, which for the record included black tea. Caffeinated and decaffeinated coffee, and green tea, but no black tea. Devastated.

What to see and do in Washington D.C

Here’s a quick re-cap of what there is to see and do in Am-ur-icah’s capital city:

The Smithsonian and Capitol Hill

Since it was spitting when we pulled in to the capital, we ran from our hotel to the nearest attraction with shelter (and food – I was starving). And thus began our tour of the Smithsonian! My favourite building from the outside was by far The National Museum of the American Indian, but my  favourite museum on the inside, and where we spent over two hours trotting around, was the National Air and Space Museum! It was jam packed with incredible planes and rockets and engines and – and – and! Well, the list goes on. The most interesting exhibitions for this particular giraffe, and her aerospace loving husband, was the history of travel – where I learned that, to my chagrin, I wouldn’t have qualified to be a stewardess because of my height. Bubble. Burst.

My first sighting of the Capitol was shortly after we arrived, as the rain was still falling from the skies. Despite the weather, the building maintained it’s majestic silhouette and grew in awesome-ness the closer I got. Scenes from Forest Gump, Olympus Has Fallen and House of Cards whizzed through my head as I stood in front of the powerful seat of the United States Congress.

The Lincoln Memorial and Washington Monument

The Lincoln Memorial was by far the most majestic of sites visited over the course of our weekend away. As I write this, I’m half way through The Lincoln Myth, Steve Berry’s latest novel focusing on scandal and intrigue surrounding the Mormons and great ol’ Abe himself. And now, despite the fictitious nature of the story, I can’t stop thinking about the monumental impact he may have had in designing the America we know today.

The walk to the monument may be the most impressive part of the visit. In order to get to the memorial, you must pass through the National World War II Memorial, a circular row of pillars surrounding a beautiful fountain that looks out on the walk to the Lincoln Memorial on one side, and a view of the Washington Memorial from the other.

As we made our way back from the memorial, we passed by the Korean War Veterans Memorial, an incredibly strong monument dedicated to those who fought, and perished fighting for freedom. On the furthest wall, visitors will find inscribed the words “Freedom isn’t Free”, a testament to the sacrifice of life by some so that others may be free. Across the way, striking sculptures of soldiers standing poised mid-march through an endless field of green.

The White House and the Eisenhower Executive Office Building

Meh. Honestly, the White House was probably the most overrated attraction in Washington. I mean, if an Obama – or even their dog – had wandered onto the lawn, it would have been another story, but as it was, it was literally a white-house, barely visible from the iron gates that surround it. The power held by those who lay inside is still very impressive, but it’s the Eisenhower Executive Office Building housing a majority of the White House staff that is really worth the visit.

The Tidal Basin is a lovely stroll – unless it’s scorching hot and you’re hungry, then it’s best put off for another time. Actually if there is one thing Washington needs along the tourist trails, it’s more coffee shops. This is one time I would actually wish for  Starbucks on every corner – any corner! En route to the tidal Basin, you will pass this amazing monument dedicated to Sir Martin Luther King. It reads “Out of the Mountain of Despair, A Stone of Hope.” So powerful! 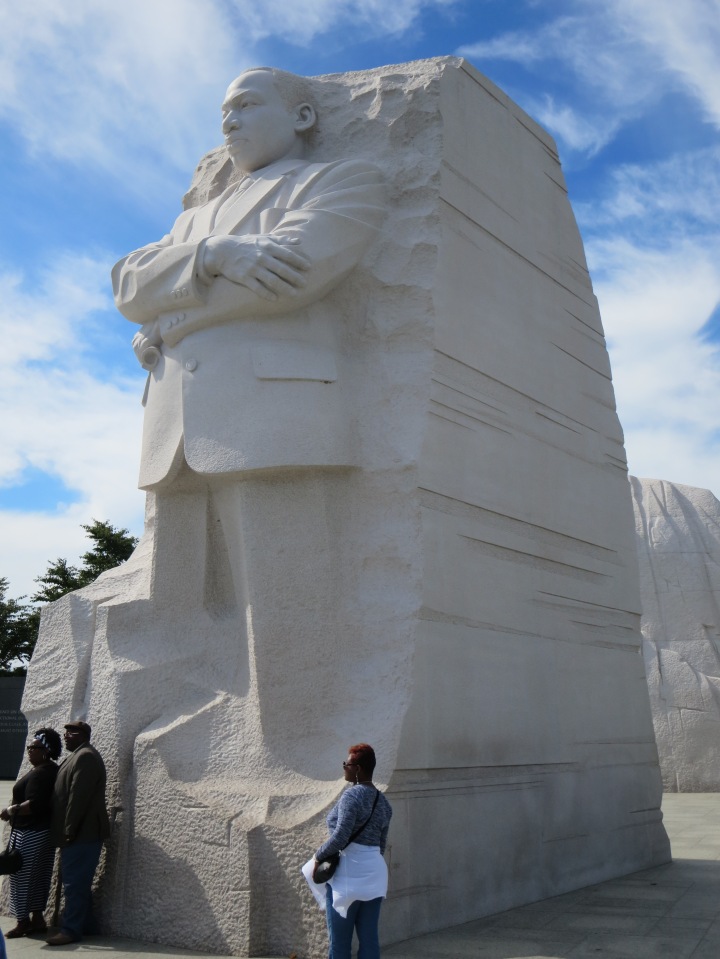 After a long walk around the city, we had a few hours to spare during which I caved and agreed to visit a botanical garden. On the whole, I’m not really a fan of greenery, unless it’s a park and I can bring wine, but with time to spare, I kept an open mind and had a great time exploring the exotic floral attractions housed in the United States Botanical Garden. 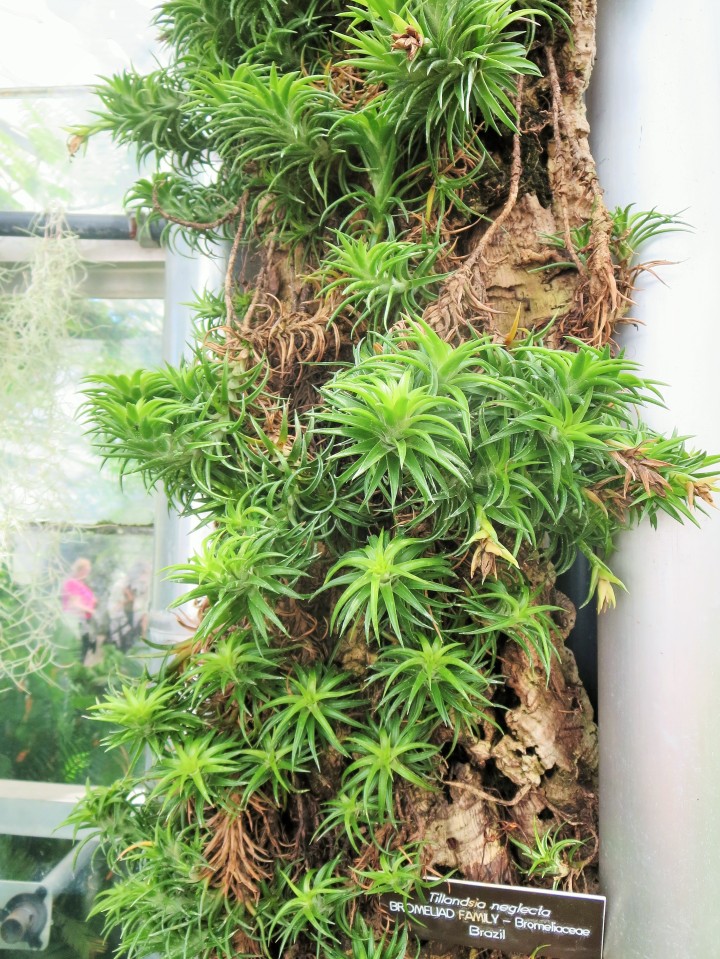 On the move in Washington D.C.

As we toured around Washington D.C, we couldn’t help but notice some highlights that may not be included in the must-sees but deserve a shout out all the same. These include an awesome street sign (upon after reading, I was dreadfully disappointed to see no butt to push), FBI HQ, an incredibly kissable fish, and first amendment to the constitution of the United States displayed honourably outside the Newseum. 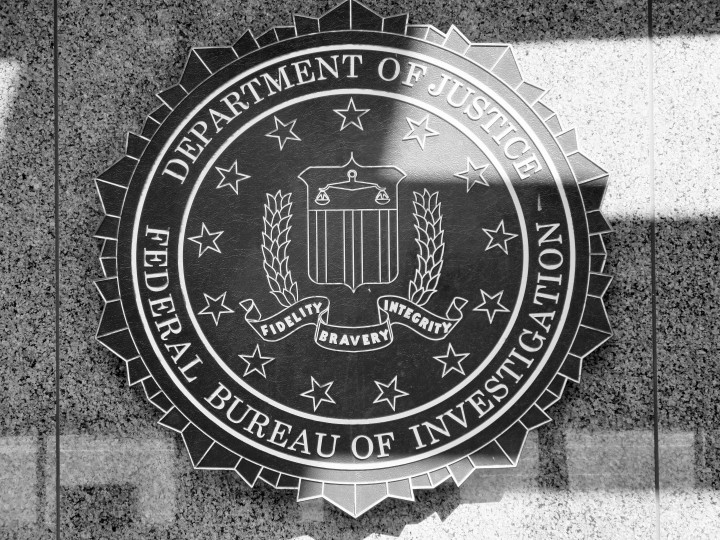 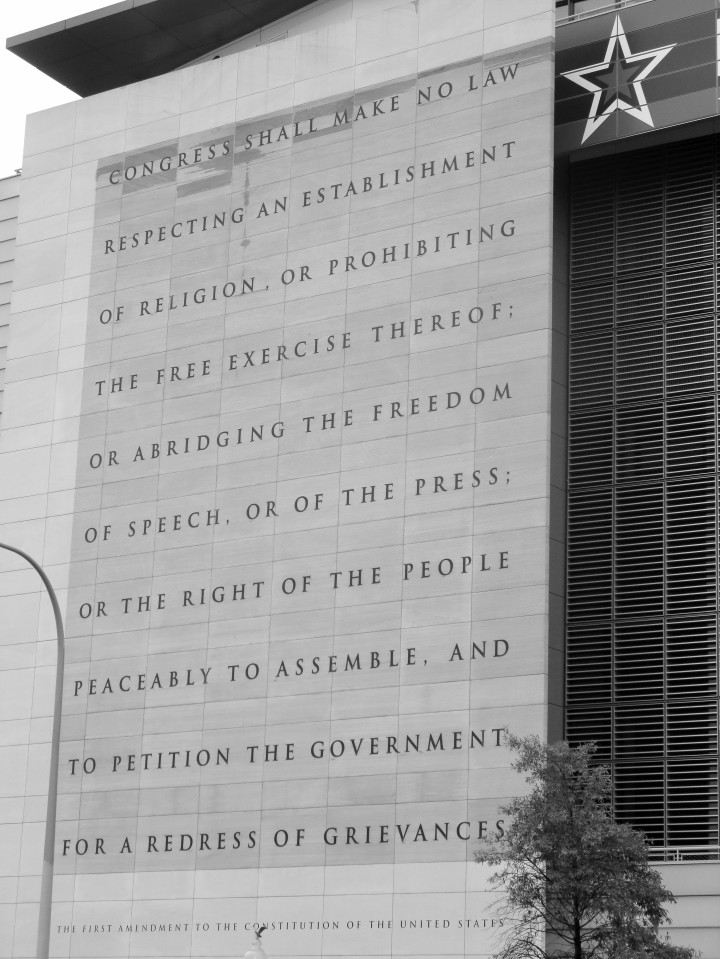 On the whole, Washington was a fabulous destination for a weekend away from baby. Unfortunately I can’t vouch for the night life because, let’s be honest, we’re parents, we were in bed by 9pm every night or soon thereafter. I can however shout out to a pretty happening China town, some delicious Pho and a plethora of Mexican eateries. We also had the chance to swing through Georgetown, which hosts a number of restaurants and great shopping, if you have some time to spare! If I had another day in the city, I would have taken the time to tour the Newseum. But I’m not too worried…  with so much still to discover and a little one who will need an education in American history , I know I’ll be back!

One thought on “Weekend-ing in Washington D.C: The Perfect Parent Escape”