Ask me where Prince Edward County was two weeks ago and I would have looked at you with curiosity, said “East” and pointed you flippantly towards a map of the Maritimes. And then you would have chuckled and patted my head. “No dear. No. The county, not the island.”

Apparently, unlike Prince Edward Island, the province, Prince Edward County, which is coincidentally, also an island, is in Ontario. Yup, pretty much in my backyard – and I had absolutely no idea. So how did I find out?

With my husband out of town, I called up my girlfriend and  together we agreed to meet smack in the middle of Ottawa and Toronto. Our fingers landed on Belleville and visions of kicking around a motel, ordering movies and sipping on boxed wine came rushing as we finalized our reservations. Not that it mattered. We have a certain reputation for making movie worthy memories whenever our paths cross, so I wasn’t too worried.

Fortunately for us, Belleville is a mere 20 minutes from Prince Edward County so as we started to research “things to do” in the area, we were blasted with wineries from all sides. “Well, this just got interesting!” I thought. We hauled our bikes with us just for fun, figuring we’d park at our hotel in Belleville and then leisurely cycle our way from vineyard to vineyard. Once we actually arrived at the hotel, we realized that the first vineyard was a solid 20-30 min drive over a bridge and then south, way south. So, we piled both bikes into one car, and made our way to Hillier Creek Estates and Winery, where we tasted our first wine and the adventure began.

Now, I’m not going to recommend that you chance parking your car at a winery only to then leave said winery, ride around the area and then return 6 hours later. I’m just saying that it might be a feasible solution if you happen to accidentally book a hotel in Belleville and have no other viable option (thank you Hillier!).

After a few hours driving to the hotel, and then more time spent driving from the hotel to our docking station, we were starving. Thankfully Hillier had been recommended to me as a lunching hot-spot and we were thrilled to see their wood oven pizza did not disappoint. One margarita pizza and our first wine tasting down the hatch, we were ready to roll.

Travelers Tip: There are no bike paths in Prince Edward County. We still haven’t figured out why exactly, since they’d make a fortune on organized bike tours. While drivers are considerate (probably driving more cautiously than normal after a few too many tastings of their own), I’d steer clear of bringing babies or kids with you to tour the region. Just my two cents, you know as a mom (so lame, I know… back to the wine).

Our next stop, after a few stops to double check our route and a lot of huffing and puffing on my part (these old legs don’t hold half the muscle they used to) was Norman Hardie Winery and Vineyard. Unlike the quiet we found at Hillier Estates, Norman Hardie was jam-packed with people, clearly an appealing venue for events and a great spot for group tastings. We skipped the downstairs patio which was super busy (but laden with beautiful looking people in case you’re looking to “clink some glasses” if you know what I mean) and headed upstairs where the tastings take place. Most tastings in the region were about $1-$2 each with some pretty rad exceptions that I’ll point out later. Norman Hardie charged $2 a tasting and only offered free tastings if you spent $100 or more!

The general consensus was that the wine was O-K and the ambiance was nice for a special event but a little “too” popular for too gals with helmet hair. So we stuck our hair back in low ponytails, put on our super cool looking helmets (that did not in any way make us look like 12 year olds) and continued on to the next place on the list: Casa-Dea Estate Winery.

This place was the BOMB.

The wine was fantastic. Up to this point, we’d sampled a handful of Riesling, a desert wine or two and threw in a Pinot Noir just for kicks, but the Eva – oh the Eva; so sweet, so flavourful… so alcoholic! This appassimento-style wine (rounding out at 14.9% alcohol content)  was my favourite.

Since we still had a little bit of biking to do, we decided to split a glass of the Riesling and head outside for a serious game of chess. While we started out giggling, about 5 moves in (and 10 or so sips into the wine), we both went quiet and chess got REAL!  Since we have the combined attention span of goldfish on crack, we opted for what we call “10 second chess” and ended the game in hilarity as my queen chased my girlfriend’s innocent pawns from square to square. Victory was mine.

After a grueling game of chess, we noticed a wedding party slowly started to arrive, and took that as our cue to move on! Thankfully we didn’t have too far to go, since RoseHall Run was about 5 minutes down the road. BREAK FOR FOOD.

I can’t go an hour without eating, so when we pulled up to RoseHall Run and I saw a food truck, I screamed “Food!” and ran to scan the selections. Since we weren’t in the mood for doughnut holes (apparently they’re like Timbits?) or another carb-heavy sandwich, we ordered a Caprese Salad, reminiscing over the time we went to Rome and ordered (and devoured) two Caprese Salads prior to meeting up with family – for dinner. 30 minutes late and stuffed to the brim with tomatoes and cheese. They were not amused. Unlike our taste buds.

We took the salad with us, grabbed our flights of wine, and enjoyed a moment of solitude atop a beautiful patio overlooking the grapes. Now, I can’t be certain but I do recall thoroughly enjoying a sparking rosé at this particular vineyard. This is noteworthy only due to the fact that I don’t normally enjoy the bubbly and I’d gladly avoid rosé given any other option. That being said, the Pixie Rosé was simply delightful and just the refresher I needed to bike my way to Sandbanks, our second-to-last stop du jour.

Sandbanks. If you’ve never heard the name, let me fill you in. Sandbanks is the name of the provincial park that draws thousands of tourists, campers and outdoor enthusiasts to Prince Edward County each year. It’s known for it’s picturesque sand dunes and beaches, and is a pillar for tourism in the region. As far as I’m concerned, if you’re going to establish a vineyard with the same name, you’ve got to have some pretty big… grapes. 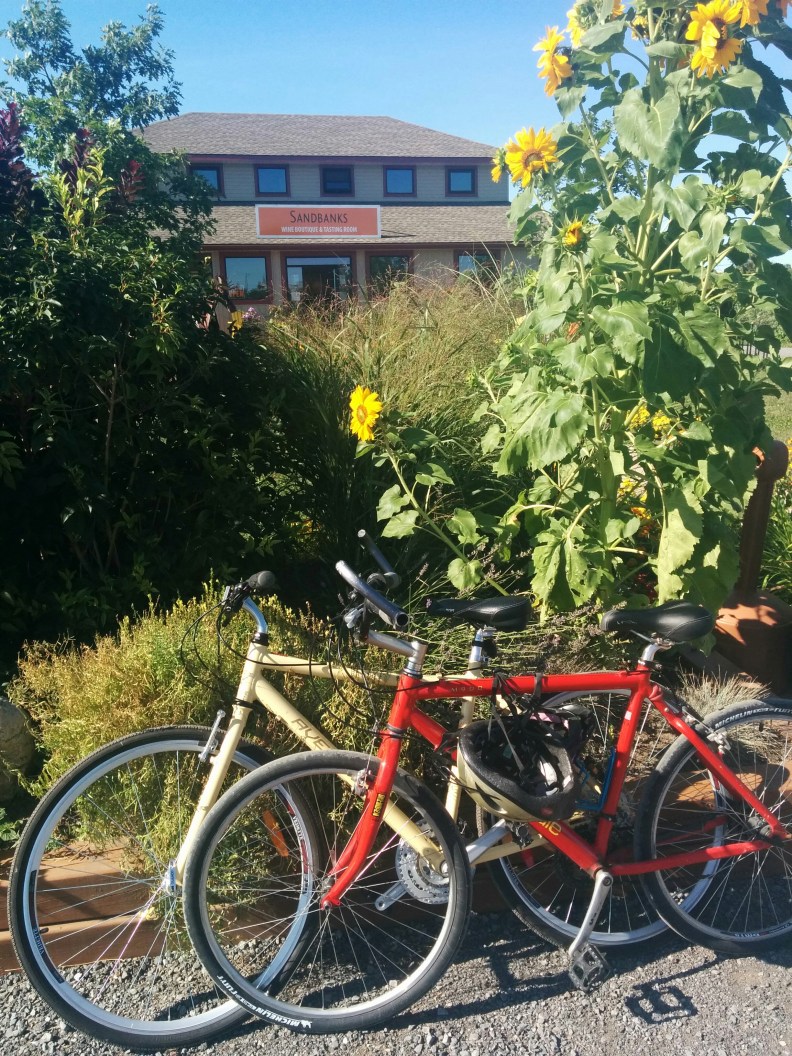 Our stomachs were still rumbling as we pulled into Sandbanks and we soon realized it was nearly five o’clock in the afternoon! Tick, tock, time for (more) food.

Sandbanks was perhaps the nicest vineyard we visited, up to that point. With outdoor tables and a delicious Baco Noir, it had picnic written all over it. We grabbed a sharp cheese and salami and took our full glasses of red outside where great conversation and fabulous company complemented a pretty perfect atmosphere. The fact that the young man behind the bar threw in the crackers for free was like icing on the best of cakes. We ate. We drank. And we laughed a lot.

Just for kicks, we decided to visit By Chadsey’s Cairns the tiny winery next door we’d heard described as “quaint” and “charming”, a small farm house with a vineyard that was actually up for sale. While it was quaint on the outside, it was a little grouchy on the inside. To be honest, the owner (or whoever was working behind the counter) seemed fed up with people coming and going, and when asked if her wines were available at the LCBO, launched into a tirade about how vineyards whose products end up in the LCBO clearly can’t sell out otherwise. We still managed to have some fun on her IKEA chairs before riding back to Hillier just in time to call it a night. 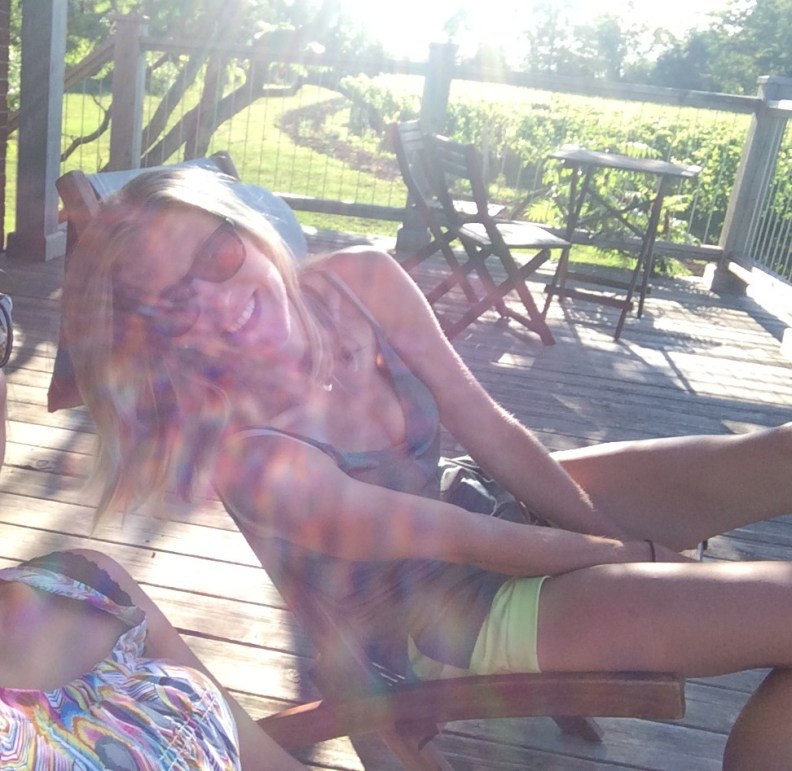 The original plan for Sunday was to drive to Waupoos County Cider Company, have lunch and make a run for it. We didn’t realize there was a vineyard basically attached – and by attached, I mean close enough to park and hop back on our bikes for “one last ride”. I’m totally channeling Fast and the Furious now – did you feel that?

Anyways, as it turns out, Waupoos Estates Winery was breathtaking. If I were to do the whole wedding things over again, this gorgeous lake-side venue would definitely be in the running. Equipped with a beauty restaurant venue, and an outdoor tent where classical music was played as people sipped away at glasses of estate wine, the vineyard has “matrimony” written all over it.

Soccer feet are so sexy, no? I don’t even play anymore, but I suppose “runner’s feet” are just as gross. Ignore the feet. The clear water and the beaming sunshine made this the most relaxing moment of our alcohol-fueled adventure. We would have likely slipped right in for a swim had there not been a big “NO SWIMMING” sign warning us against it. I suppose wine and water don’t really mix; in a glass – or otherwise.

So, we put on our helmets (safety first!) and rode the 1km (at most) to the Waupoos County Cider Company. My partner in crime was a cider fanatic and she was all but drooling by the time we sauntered into the restaurant. It was here that we found the best deal yet – a full flight of cider for $4! And we’re not talking little dollops of vino that could be mistaken for backwash; we’re talking 4-5 gulps of delicious and refreshing cider.

Ok, I said delicious but I’m lying. I actually didn’t like the cider (my sweet tooth lends itself more towards Sommersby and aware from the bitter bite of Waupoos) but my girlfriend did (her favourite was the blood orange cider featured below), so ignore my opinions on the liquid and focus on the fantastic pizza that got a thumbs up all around.

If you haven’t been to Prince Edward County; now’s the time to do it.

Grab a girlfriend (or many), pack a bag full of munchies and just go.

You won’t find lobster (but there’s tons of pizza). Anne of Green Gables doesn’t live there (but you’ll run into some pretty funny folks). And it’s like an hour and a half outside of Toronto. Plus there’s wine. Lots and lots of wine. Enjoy!

baby giraffe giraffe lifestyle giraffe on the run giraffe travel guest travel blogs street eats: foods from around the world The baby blogs thetravelinggiraffe the view from above top tips from thetravelinggiraffe
Loading Comments...
%d bloggers like this: