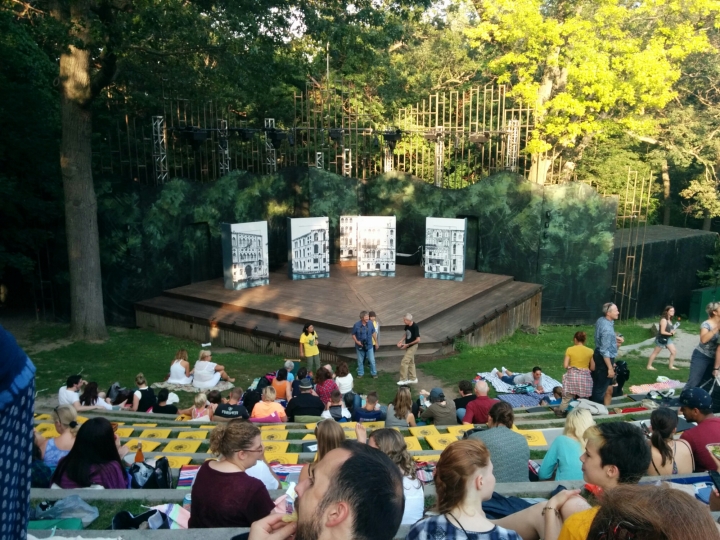 “Shakespeare in the Park” has long been on my hit-list of summer events to attend in Toronto, but somehow, until this year, it never quite made the cut. When my husband left a week before me with our toddler on a plane to Europe, and I was left with an open calendar, a night off and a burning desire to get the hell of the house, I finally bought a ticket. Or would have, if it wasn’t pay by donation, which it is.

Partial to Othello, with a soft spot for Macbeth and a love for Romeo and Juliet that is so cliche, it’s a little embarrassing, I was delighted when I found out that during this year’s run of Shakespeare in High Park, Canadian Stage would be performing A Comedy of Errors, one of the plays that didn’t make it onto the high school curriculum, or university reading list, or sadly my bookshelf thereafter (for which there is really no excuse).

Amateurs in the Amphitheater

The show started at 8 o’clock and I was warned to arrive early in order to ensure good seats (or any seats at all). Pulling in around 6:30pm, my girlfriend and I snagged the last two seats in the outdoor amphitheater where the production was to take place. Once we were seated, we realized that we had completely underestimated our entourage.  Our stomachs rumbled as we saw veterans of the soiree pull out picnic baskets filled with sushi and wine, staring down at our roasted chickpeas and cheddar popcorn in disappointment (amateur move #1) and we continually shifted cheek to cheek as our bums squeaked loudly against the plastic bag we’d made into a make-shift blanket (amateur move #2) longing for something soft to separate our skin from the ants crawling beneath us.

Thankfully as I was buying a couple bottled waters, I realized that you can also rent a blanket for the entirely of the show! Woo hoo! One problem solved. Our derrieres slowly regained circulation and our body temperatures started to rise. Let it be known that the show catering company whose name escapes me offered a lovely array of snacks for a very reasonable price! The blanket cost about $4 or so for the whole night and let me tell you, it was SO worth it.

A Comedy of Errors (Oh, the Irony…)

As the clocked ticked its way closer to 8pm, two more girlfriends joined us with some candy and chocolate mix that upped our food game a few notches. Unlike us, these two brought their own blanket and we started feeling much more event appropriate.

Then, all of a sudden it started. The actors took their places and the play began. The quality of the actors was absolutely unparalleled, and the script hilarious! Well done William, well done. The irony that ensued was unmistakable. Nearly five minutes into the play, I reached over to offer one of my girlfriends a handful of candy, and inadvertently knocked over a can of cider. Five minutes later, one of my girlfriends opened a bottle of water that was a little too bubbly and promptly moistened our surrounding audience. A comedy of errors? We were it.

The play lasted about 2 hours and was the absolute perfect way to spend a summer night in the city! Looking for something different to do, in support of a great organization? Look no further. Shakespeare in the park! Get thee there, and have some fun.

Have you craved Mexican? I mean really craved it? Like lick the salt from your tongue, feel the beans in your tummy kind of crave it? Well, I have! Last night, despite a sincere dislike for all things Tequila, I was craving Margaritas, or at least the idea of an icy cold Margarita on a patio in the midst of Canadian summer heat.

I had the perfect excuse for a night in the city since a friend from Hamburg was visiting and we knew it would likely be years until we met again (okay definitely not years, but many months at the very least). So, five of us got together and plopped ourselves down at Milagros, a tasty little cantina in Queen West, one of the Toronto’s hotspots.

Despite having the best of intentions to follow my taste buds, I backed right put of my strawberry Margarita and settled on a glass of sangria and a slurp of my companions’ Micheladas; beer mixed with chili, lime, Worcester sauce and hot sauce. That was one of the strangest things to got my lips in a long time, but truth be told, it was like a Mexican Caesar, and was pretty much delicious.

We kick-started our meal with a scrumptious serving of nachos and guacamole. After washing that down with a refreshing Corona, I ordered myself a Tinga tostada and two tacos (Hongos con Quesa) filled with a type of feta cheese that was grilled to perfection!

The highlight of my meal however came after our food was cleared away. Since I was the designated driver, I opted in for a caffeine-inspired pick me up to carry me the 40 minutes back to the burbs. I’m not a coffee drinker my nature, so I thought I’d spice things up (literally) and order a Café de Olla, a delicious cup of coffee served with cinnamon and molasses. Topped with a dollop of milk, it was surprising flavourful and proved a sweet – and spicy – way to end the perfect night.

Heading to Milagros? Give it a try! It’s a Mexican delight you won’t find anywhere else. 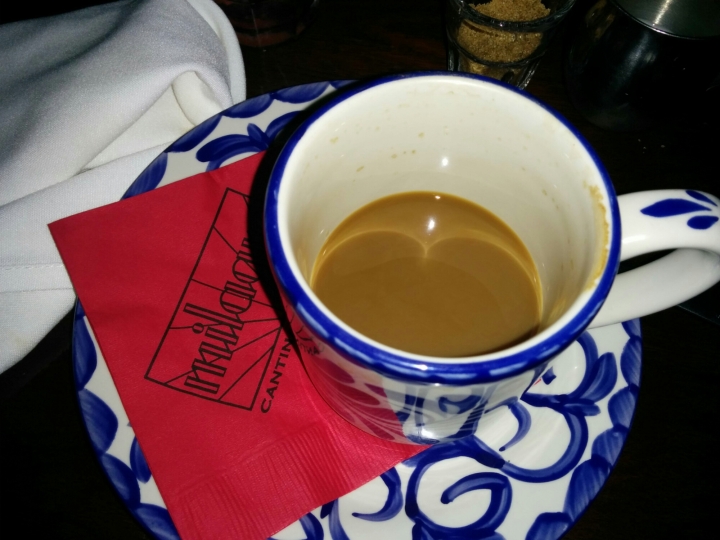 I may have accidentally stumbled upon what is by far the sweetest race in all Toronto. Picture the Amazing Race. The adrenaline, the checkpoints, the challenges. Now bring all that hype to Toronto and donate all the money raised to a charity whose mission it is to to “provide a safe, supportive place where children and youth can experience new opportunities, overcome barriers, build positive relationships and develop confidence and skills for life.” Welcome to the Capital One Race for Kids. 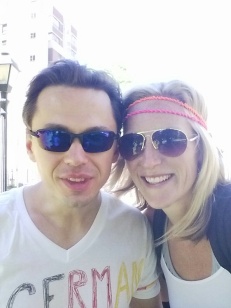 The weather was perfect as we rolled into the square at Yonge and Dundas. The sun was shining and there was a light breeze sweeping over
race participants as they entered from every corner of Toronto. Most were wearing the bright red Capital One Race for Kids T-Shirts we’d been given as part of our race-kit. Others, like us, had customized their uniforms and showed up in neon jumpsuits, corporate swag and serious looking sports attire we weren’t 100% prepared for.

As 60+ teams gathered together in the square, we started to get the sense that this was a bigger deal than we’d anticipated. We’d signed up months ago at the recommendation of a friend and nearly had to back out because of injuries, babysitting trauma and other complications that would have made it way easier just to stay at home and work on our tan. Thankfully, last minute, we’d managed to get our act together and show up on time at the start line. The Short, Blonde, Bearded Germans had arrived.

After mixing and mingling with the race organizers, and posing for a few pictures for tourists, we were welcomed to the main event by a kids dance group who rocked the stage and a warm up led by a fitness guru who sent a number of the men skipping their way straight to the sidelines. Upon receiving a detailed break down of the rules, which included the ability to use public transit, and allowing the corporate fundraisers a 5 minute head-start (darn you!), we were off. END_OF_DOCUMENT_TOKEN_TO_BE_REPLACED